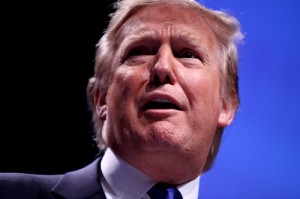 Donald Trump couldn’t be any more full of BS if he swallowed every pasture in Texas. Trump had his fun. made a fool out of the national media, and now he’s gone home to do what he does best, play the fool on a realty show.Trump proves part of the old adage “you can fool all of the people some of the time.” He did fool a lot of people into thinking he might run for President. The reality is he could never survive media scrutiny into his finances and personal affairs.

Can anyone imagine Trump actually doing the hard work of slogging door to door in Iowa and sleeping in the homes of real American voters–in houses that didn’t have servants quarters to house his staff of hairdressers?
In the end, Trump with his multiple wives, his old pro-choice views and his Democratic Party donating ways had as much of a chance of winning the Republican Party nomination as Al Sharpton: zero!

The fact that we are even talking about Trump at all right now as a presidential candidate is an indictment of the entire political media establishment that allowed itself to be played like a fiddle for the sole purpose of letting an egomaniac indulge himself and promote his silly TV show.

1 thought on “Donald Trump Not Running for President ?-Media Training”