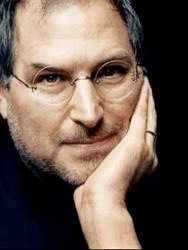 by TJ Walker and Mike Bako

The announcement of Steve Jobs’ death has certainly shined a light on his brilliant career as an innovator at Apple. What it also shines a light on is his amazing skills as a presenter and speaker.

What lessons can be learned from Jobs that can help you as a speaker?

Jobs had an amazing ability to speak with passion and make his ideas understandable and memorable through telling stories and demonstrations. He only focused on one idea at a time and did not muddle what he was saying by having busy PowerPoint slides behind him.

His use of PowerPoint is another example of how he simplified his message. Jobs hardly ever used words on his slides; he let the image paint the picture and reinforced it with stories.

Jobs never let the fact that he was a techie and generally speaking to a tech audience turn his speeches stale with an overload of jargon. He knew that he needed to connect on a human level and speak about
what a regular person really wanted out of a product rather than just spewing out impressive specs and features.

The way Jobs walked around the stage freely, comfortably and relaxed is a lesson that everyone should learn and follow. You never saw him stationary, holding onto a lectern like many people making a presentation.

Finally, and this is a lesson everyone should follow, Jobs rehearsed his speeches. You may think looking and sounding relaxed may have come naturally for him but he put in days and hours into rehearsing for every major speech and product launch.

From a business standpoint the likes of Steve Jobs might not come along again in our lifetime but from a communications standpoint we can learn lessons from what he did well and carry on his legacy as a great communicator and presenter.