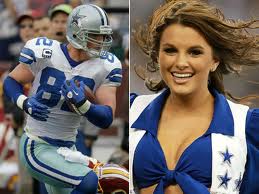 On Thursday, during the team’s Thanksgiving Day game against the Miami Dolphins, cheerleader Melissa Kellerman was accidentally tackled at the end of a play by Cowboys tight end Jason Witten. Afterward, Kellerman tweeted light-heartedly about it. Now, according to CNBC reporter Darren Rovell, the team has forced Kellerman to delete her Twitter account.
After the tackle–which was caught live on camera (see video below) from a number of different angles–Kellerman quickly got up. Later, she posted two tweets about it. One said: “Not hurtin’ today, like some of y’all thought I would be! Our [tight end] isn’t as tough as he looks…That or I’m WAY tougher than I look. ;)”