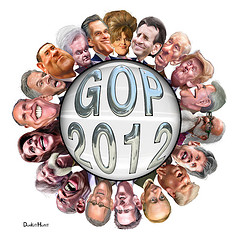 This is a complicated question because there are many ways of “winning” a debate like this.

Herman Cain won the “Pat Buchannan/Alan Keyes contest for most articulate debate performance from a candidate who doesn’t have a snowball’s chance in hell of winning” award.

Ron Paul won the “Everyone in the whole world is a complete f-ing idiot if they aren’t a Libertarian like me and think we should eliminate all taxes” contingent of the Republican Party.

Rick Santorum won the “I want an angry Ann Coulter-type candidate who is willing to call all Democrats, liberals and media people traitors and imbeciles” award.

I am going to try to analyze the debate from another perspective: Who “won” the debate in terms of coming across in such a favorable way as to increase his chances of winning support across the spectrum of the party and eventually winning the nomination.

First, some assumptions about what matters in rating someone’s communication skills:

Who you are and what your background is.
What your ideas are.
How you communicate.

If the only thing that mattered was how well you speak, then Alan Keyes and Jesse Jackson would both have been two-term presidents.

Given my assumptions, I rule out Herman Cain as a plausible presidential candidate because he hasn’t served in high office. There is no record of the GOP nominating businessmen from the private sector to be their nominee. Eisenhower had not been elected to anything, but winning WWII did give him credibility.

Ron Paul isn’t a plausible presidential candidate because he has never represented more than half a million people in a congressional district. American people rightly think of Members of the House as closer in stature to city council members, not Presidents. If you doubt me, just try to name a Member of the House of Representatives who has been elected President in the 21st or 20th centuries. Hint: it can’t be done.

Rick Santorum is so disliked by the people who know him best, his fellow Pennsylvanians, that they fired him from his job as a Senator a few years back. Again, let’s look at history to try to find someone gaining a nomination that has been fired from an elected job in his own state. True, Nixon lost the 1962 California governor’s race, but he wasn’t the incumbent and he had rarely spent much time there in a decade and no one really believed he wanted to be governor. The other problem with Santorum is that nobody likes him personally. The GOP has a history of nominating men who are really likeable and personable. Reagan, Bushes, Dole, McCain, even going back to Ford—all men were hugely liked by people who knew them up close.

Gary Johnson, the former New Mexico governor, seems credible at first blush. He’s a former governor form a Southwest state. But he’s a Libertarian. And, while leading Republicans pay homage to Libertarian ideas from time to time, the base of the Republican Party actually believes in big, strong government to ban abortions, lock up drug users, and wage wars against terrorists. So I eliminate Johnson solely on the basis of his ideas being too far out of the mainstream of the GOP primary voters.

That leaves us with former Governor Tim Pawlenty. The debate, in my view, really comes down to Pawlenty versus Pawlenty. So who won?

Not surprisingly, Pawlenty won to the extent that he came across ok, didn’t make any huge blunders and more people learned about him for the first time. Pawlenty meets my criteria above regarding having the right background (former governor) and having acceptable ideas (mainstream conservative). So it comes down to his speaking skills. He came across as perfectly competent, professional and credible. No, he didn’t fire off the sound bites that would define and “win” the debate in the traditional sense. But he did the things he needed to do to impress serious voters and fundraisers who are comparing him not to the others on the stage Thursday night, but instead are comparing him to Romney, Huckabee and Mitch Daniels.

It won’t show up in any day after poll, but Pawlenty is the only one who will gain traction and benefit from this first debate, so he was the big winner of the night.

If you aren’t quite sure who I am and where I am coming from, here’s a sample of my debate analysis of the 2007 GOP debate as it appeared in National Review.

“Mike Huckabee was the standout among the seven second-tier candidates.”

“John McCain gave a very mixed performance. At times he was energetic and showed glimpses of his old self — the one that made him the darling of the mainstream-media establishment.”

“Duncan Hunter proves once again that the American people are savvy time savers by not giving serious presidential consideration to mere congressmen.”