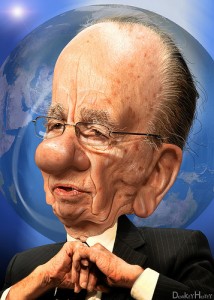 In business, reputation matters. It doesn’t matter if you are a large cap, small cap or privately owned. And that’s why the investors of Rupert Murdoch’s Newscorp should be very scared now. They’ve lost $7 billion in market cap in the last week and that may be just the tip of the iceberg.

Rupert has made a lot of enemies during the last 50 years, and now they smell blood in the water. For now, Rupert’s liberal political enemies are leading the charge, but it won’t take much for the attackers to grow to an across the board spectrum of business and political interests who have had enough of the Murdoch empire’s tyrannical tactics.

There is an old adage that you should do anything in business that you wouldn’t want to see described in detail on the front page of a major paper. Apparently those who ran major papers in England figured they had a loophole, since they decided what got on front pages. Not so any longer.