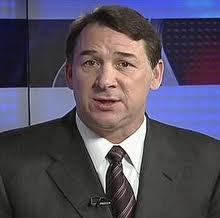 You would likely recognize the uniforms for the New York Rangers. They are blue. They have been blue since the Original Six team began its existence in the NHL. They are probably among the most iconic in the entire sport of hockey. This may be why, especially among Ranger faithful, you will hear the team often referred to as “The Blueshirts.”

Mike Milbury, while kicking off this afternoon’s Winter Classic between the Rangers and the Philadelphia Flyers, was trying to be coy in describing the visiting Blueshirts. Except, instead of Blueshirts, a trip of the tongue gave us this proud moment in expletives on broadcast television.