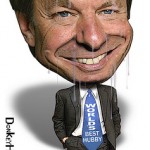 The pristine, family man, image that John Edwards spent so many years cultivating has long since evaporated and now the final nail in his political coffin has been set with today’s indictment.

Edwards is a perfect example of someone who spent a great deal of time building his popularity on an image that turned out to be a lie. He spent years trotting out his wife and kids at political events to paint a wholesome image catering to the American public when in fact he was living a lie.

MEDIA LESSON: If you spend a long enough basing your popularity on an image that can not be sustained or is an out and out lie, you will end up doing more harm to your reputation in the long run.

Edwards would not have been the first politician running for president to get caught in a sexual scandal. Hello, Gary Hart. But his lying, cheating and manipulation of the media and all his supporters led him even deeper into a hole that he could not get out of.

Gary Hart was able to continue on with some semblance of a career. Edwards’ political career is long gone and his law career might follow quickly behind if a felony conviction follows.