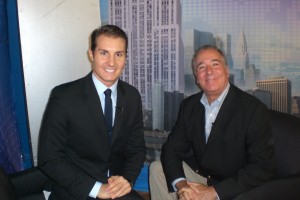 Speaking Channel TV’s Public Relations talk-show Inside Communications with Mike Bako has released its latest interview with industry veteran Peter Himler, founding principal of Flatiron Communications, LLC. Mr. Himler sat down with host Mike Bako to share all things PR including how the new communications landscape has not changed his clients’ overriding goal: to create a positive, branded presence for their products, services and POVs in the media. What has changed are the means to this end, which now encompasses not just earned media coverage, but paid, owned and ultimately shared.

Like most PR professionals, Mr. Himler stays on top of new media developments, but says that many clients continue to measure (and pay) agencies by traditional media results. Hewlett-Packard recently performed a study on tweets and discovered that most of the conversations were influenced by traditional media. With saying this, securing a story in a traditional media source is becoming more and more challenging. It’s no secret that capturing the attention of a top tier journalist has grown increasingly more difficult. since they are inundated with hundreds of email pitches a day

“One of the things that I tell my clients is that you’ve got to find the influencers,” said Mr. Himler. He went on to explain that the influencers whom clients should be targeting, are the very influencers that the big-branded traditional outlets follow.

For the last six years, Mr. Himler has been sharing his take on the PR profession through his blog – The Flack. The blog’s mission is to shine a brighter light on the subtle role public relations plays in politics, popular culture, journalism, business/finance, entertainment, technology, social media, consumer marketing and sports. Winning the “2006 PR News Platinum Award” for the year’s best blog, proves that it’s been a successful mission.

To learn more about Peter Himler’s outlook on the PR industry, watch the full interview with Mike Bako by clicking here.

Peter is founder and principal of Flatiron Communications LLC, a PR/media consulting firm in New York. He most recently served as Chief Media Officer for Edelman Worldwide, following 11 years with Burson-Marsteller as head of the agency’s U.S. corporate and strategic media team and its worldwide spokesperson. Prior to B-M, Peter was media director for six years at Cohn & Wolfe, which followed five years at Hill and Knowlton where he led H&K’s broadcast and consumer media relations group. He began his career with three years at the NYC entertainment PR firm of Robert Zarem Inc. In 2005, PR News named Peter its “PR Professional/Media Relations Executive of the Year.” That same year, PR Week awarded the PR program he led to build the World War II Memorial in Washington D.C. as its “Public Sector Campaign of the Year.” Peter’s blog, “The Flack” recently was awarded a “2006 PR News Platinum Award” as the year’s best blog. To check out The Flack, visit http://theflack.blogspot.com. You can follow him on Twitter @peterhimler

About The Speaking Channel

The Speaking Channel is the home for all things speaking. The Speaking Channel’s newest show Inside Communications invites industry pros to take viewers “inside” the strategies and tactics used to develop campaigns that both meet their client’s objectives and exceed their expectations. To be a guest on Inside Communications, please e-mail producer@speakingchannel.tv.