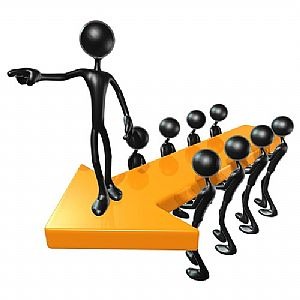 I read every one of his numerous books.

I watch his DVDs and listen to his CDs.

I watch him speak when we are at the same convention

This is how I learn and it costs very little.

Now, I hate to take the “stalker” metaphor any further, but I have also gotten to know Jeffrey and he has been nice enough to give me a tour of his compound in an old Factory in downtown Charlotte. There, he showed me his extensive library on every book imaginable relating to sales, plus his TV recording studios. The man eats, breaths and sleeps sales (and was wildly generous by giving me many of his books for free, as well as his time).

But it doesn’t matter if you ever meet your role model. I have also learned a great deal from Alan Dershowitz and Zig Ziglar, even though I have never met either man.

The point is that you shouldn’t have to reinvent the wheel for everything you do in your career. Look at what more successful people in your field and then do the same thing, but with your own spin or perspective. If every guru you admire in your field has a great weekly newsletter, maybe you should too—don’t wait until you have 100,000 followers before you start, chances are your guru role models didn’t.

Learn how your guru role models progressed throughout their careers. This knowledge can sometimes help you navigate your own career steps, plus it can be motivational to know that many of the most successful people in the world were, at one time, much worse off than you are now.

As Warren Buffet once said “smart people learn from their mistakes, but the real trick is to learn from other people’s mistakes!”