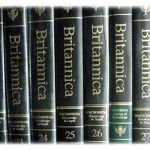 The Chicago-based publisher said 2010 edition will be its last one in print.

In a series of blog posts on the Encyclopaedia Britannica website, editors and executives remained optimistic about the decision.

Encyclopaedia Britannica was first published in 1768. According to The New York Times, they became a status symbol for families in the 1950s. Sales of the encyclopedia peaked in 1990, when 120,000 editions were sold in the U.S., the Times reported.